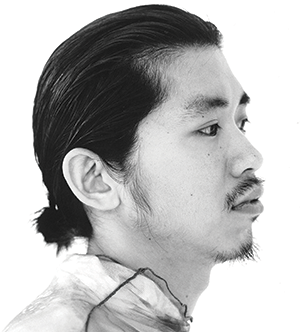 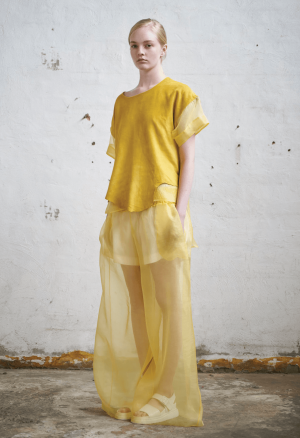 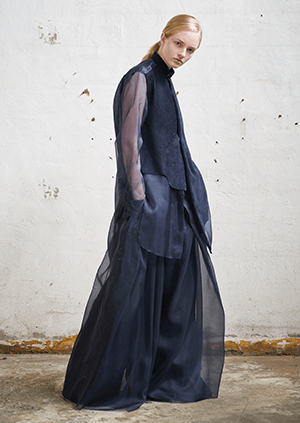 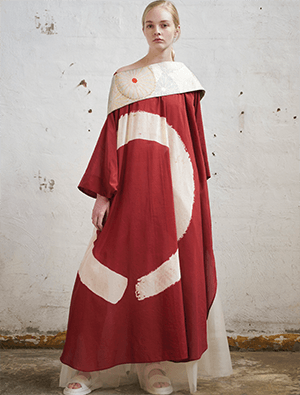 “The beautiful blue sky and not many people, that was my first impression,” he remembers.

Having left Japan, working holiday visa in hand, Akira immediately felt that Sydney – and Australia in general – was a place of opportunity, the likes of which he would never have had in his conservative hometown of Kyoto.

The Japanese native stepped off the plane that day with a background in social welfare and a burgeoning interest in fashion but never did he imagine that he’d one day launch an eponymous fashion label that would see him become one of the most iconic designers on Australian shores.

Despite originally pursuing a different career path, Akira admits to having an innate interest in fashion and clothing from early on, and it was a lack of variety that led him to start making his own clothes.

“From a consumer point of view, I used to buy a lot of clothes for myself and one of the reasons I became interested in making garments back in the ’80s was there not being much choice in what you could get,” he says.

“It was limited; that’s why I thought I might make garments for myself.”

It all began at the kitchen table. He bought a small domestic sewing machine and attended a TAFE course, which taught him the basics. However, Akira views the skills he learnt and his aptitude for creative design as two very different things. “For anyone who is serious about being involved in the fashion industry, it’s essential to learn those basics,” he says, “but I use that knowledge and those skills as a tool and not to dictate a creative direction.”

With his newfound passion for sewing, Akira realised if he were to make a living out of design, he’d need to start making clothes for the market that demanded them most – women.

“Back then (in the ’80s) it was only women who invested money and time on dressing,” he says. “I like to think that my designs are for all women, an ageless muse.”

The Akira woman isn’t so much about a particular look or a certain body shape – these are constructs that the designer finds limiting – instead, being an Akira woman is a state of mind, indiscriminate of physical attributes.

“Confidence,” he states. “I like to think that my designs are confident, with a strong sense of direction.”

The influences of the East are evident in Akira’s designs, though he manages to balance the homage to his heritage with wearability, creating an aesthetic that transcends borders.
“It’s a fine balance you have to find,” he says. “It’s important to not just chase the trends, but at the same time we have to sell clothes. You need to establish your own handwriting, your own signature style, and you need to satisfy your soul, really.”

Akira is something of a chameleon when it comes to the design process, needing different environments at different times to stimulate his creativity.
“A bit of everything really,” he says. “Sometimes you need people to bounce back and sometimes you also need to be alone. Every day is a bit different; it depends on your mood.”

Inspiration on the other hand, is something Akira finds everywhere he looks:
“Often I find it when I have a conversation, or through seeing an exhibition, maybe entertainment, maybe a movie. I think it depends on how open you are.

“For inspiration to come into your realm, into your world, you’ve gotta welcome it.”

For someone whose designs are so vibrant and colourful, Akira’s own sense of style is more subdued, with the designer favouring a darker palette, but there’s a perfectly good reason for his subtlety.
“I feel I’m more focused on dressing others,” he says. “My purpose is to make sure that creativity comes through in a form of fashion for others, so what I wear becomes a kind of uniform.”

Though he is known for his wearable style, Akira admits to enjoying the freedom that costume design allows, something he experienced whilst working on the costumes for the Australian Ballet’s production of Romeo and Juliet. He likens the process to designing couture:

“Having a large budget and not having to think about production means you’re not restricted by saleability or price point.”

His designs are heavily exhibited both here and internationally, and it’s clear that Akira Isogawa’s handiwork has come to be viewed as an art form. However, this humble designer shies away from the label and doesn’t buy into the hype – for him it’s a business and there’s always work to be done. His response to being called an artist: “Really?”

Since his arrival in 1986, Akira has spent more years living in the land Down Under than he ever did in Japan, and his award-winning status is testament to the way our nation has warmly embraced this expatriate. In fact, he was publicly recognised soon after launching his label.
“I was awarded Designer of the Year along with a Women’s Designer of the Year award,” Akira says.

“All I really felt was thankful to the country, Australia, for accepting me. I wasn’t born here, my family are still based in Japan but people do accept me and it was amazing to learn that attitude, the sense of acceptance.”

It’s clear that Australia is home for Akira Isogawa. His humble nature, his dedication to clothing women in confidence and his contribution to fashion have ensured great success for the designer here, whilst his undeniable talent has cemented his icon status. He may have admired the country’s beauty all those years ago when he stepped on to the tarmac, but all things considered, he has made the place more beautiful and our blue skies are happy to have him.[/vc_column_text][/vc_column][/vc_row][vc_row type=”in_container” full_screen_row_position=”middle” scene_position=”center” text_color=”dark” text_align=”left” overlay_strength=”0.3″][vc_column column_padding=”no-extra-padding” column_padding_position=”all” background_color_opacity=”1″ background_hover_color_opacity=”1″ width=”1/1″ tablet_text_alignment=”default” phone_text_alignment=”default”][recent_posts style=”default” category=”designers” columns=”3″ posts_per_page=”3″][/vc_column][/vc_row]