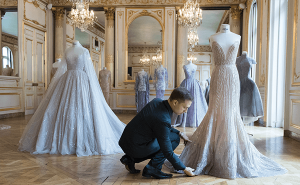 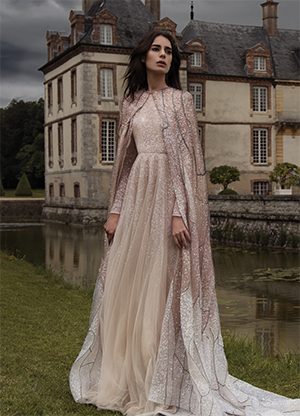 [/vc_column_text][/vc_column][vc_column column_padding=”no-extra-padding” column_padding_position=”all” background_color_opacity=”1″ background_hover_color_opacity=”1″ width=”1/2″ tablet_text_alignment=”default” phone_text_alignment=”default”][heading subtitle=”Iconic Australian Designer Paul Vasileff”]Paolo Sebastian Designs [/heading][vc_column_text]Like most children of the ’90s, Paul Vasileff grew up on a diet of Disney and fairy tales, and while many of us look back fondly upon our childhood favourites, Paul has carried these nostalgic stories into the future, where they continue to infiltrate his life and his work.

He is a storyteller, yes, but unlike Disney, he tells his tales not on the silver screen, but through the threads, fabrics and silhouettes of his couture designs.

If his name doesn’t ring any bells, perhaps it’s because the designer is better known as Paolo Sebastian. At just 26 years old, this South Australian native has accomplished more in the fashion world than many twice his age could hope to achieve.

Paul’s education began early – he first dabbled in the craft at his nonna’s feet, a talented seamstress who viewed sewing as an art form and helped him design his first dress at age 11. As a teenager, he took sewing, drafting and pattern-making lessons once a week after school, while also interning with a local tailor, and in 2007 he launched Paolo Sebastian.

The memory of his first show is one of his most cherished: “I was 17, I had no professional knowledge and no contacts in the industry but putting on that show was so much fun and I learnt so much from it.

“Having all my friends and family around helping me, knowing they were behind me, was such a nice feeling.”

His artillery of practical knowledge came in handy at 19, when he learnt he’d been accepted into a scholarship program at Milan’s prestigious Istituto Europeo di Design, an award he’d applied for at his parents’ suggestion and had forgotten about until he received the call.

It was a moment that would change his life forever: 19 years old, having never lived away from home and yet here he was, packing up his life to live in a foreign country for a year.
“At 19, you’re away for a week and you think you’ve missed out on everything!” he laughs. “It was really daunting and I hated it for the first three months.”

With his Italian/Bulgarian heritage, it wasn’t long before Paul began to pick up the language and the more he got to know the city, the more settled he felt.
“That’s when things really started happening,” he says. “I met Giorgio Armani – a true gentleman. He was so humble and really took the time to sit with me and look through my portfolio. I attended the Versace fashion show, went to Naomi Campbell’s 25-year anniversary with Dolce & Gabbana – all of these incredible things started to happen and made me feel more at home.”

Aside from the celebrity perks, the course itself was invaluable according to Paul, and the calibre of experts at the school gave him access to some of the industry’s most celebrated talent.
“There’s a real focus on design theory and fashion history,” he says. “My patternmaking teacher was a patternmaker for Dolce & Gabbana, my knitwear teacher was a knitwear designer for Prada. They were incredible people to learn from and without this opportunity, I wouldn’t be where I am today.”

Since his first show, Paul and his label have come a long way. Today, a Paolo Sebastian runway is something of a theatrical experience. His recent showing of his Wildflowers Collection at the 2016 Adelaide Fashion Festival saw the creation of a real life meadow, complete with grass grown in the mountains, and dandelions and hay infused with flower essences to have the room smelling like a warm summer’s day.

The same year, Paul was also enlisted by Australian Vogue to design a custom corsetry piece for the June issue’s Kim Kardashian West spread: “Whether you like her or not, she’s got such an influence in the industry and beyond that, and it was such a huge honour to be dressing her and working with Vogue.”

He also recently showed one of his collections in Paris; a surreal and magical experience.

“I had dreamed of it my whole life and to see it come to fruition… it was like watching a movie of it happening to someone else,” he says.

While it’s one thing to be heralded in the fashion industry, to be recognised on a broader platform is a whole new world, one in which Paul found himself centre stage when he was awarded the 2017 Young Australian of the Year Award. He is the first fashion designer to be a recipient in the history of the award and is still shocked to have been chosen: “It is a huge honour and it’s great for the industry. People are starting to see there is value and talent here.”

He is also pleased that Australia is beginning to take fashion and its role in society more seriously.

“Fashion shapes the way we live and it’s a real reflection of who we are as a country and as a society,” he says. “Gabrielle Chanel changed women’s fashion by introducing pants for women and that has changed how women live their lives. Fashion is telling of an era and it has the ability to transform people.”

His love for storytelling extends into his designs, and he finds inspiration in a myriad places.

“Generally when I’m working with a collection, there’s always something that triggers and sets it off and I know when I have that moment it’s going to set the scene for the theme of the collection,” he says.

“I was on holiday in Bulgaria when I had the idea for the Snow Maiden collection. I came across some art work and started researching Slavic fairy tales and decided to adapt that. The garments kind of told the story. Those moments, I don’t know when they’ll come or why but I’m grateful when they do.”

For his custom designs, Paul’s clients become his muse and he has developed a real talent for entwining their stories meaningfully into his designs. A recent example is a dress he created for a friend’s wedding:

“Her grandmother had passed away just before the big day and she wanted to walk down the aisle to Moon River, her favourite song,” he says.

Unsure if she’d be able to complete the walk without breaking down, Paul suggested an alternative: “I decided to have the lyrics of the song embroidered into the train of her dress, so that her grandmother was with her on the day. That’s what I love about the couture process, you can take little things like that from the client and put it into the dress and it becomes so much more than just a dress.”

Choosing to remain in South Australia, Paul credits some of his success to the digital age.

“It doesn’t matter where you are in the world,” he says. “As long as you have WIFI, you’re accessible; the internet is an amazing and powerful way to reach people.”

Yet with all of his international acclaim, this young designer has had every opportunity to relocate to a more glamorous location, but he hasn’t been lured. His reason?

“I have so much support here and the state has done and given so much to me, I feel it would be a disservice to turn around and leave,” he says.

“My time in Milan really was an amazing experience, but I had no one to share it with.”

With his love of nostalgia and fairy tales already established, we can’t help but hear a sentiment from The Wizard of Oz echoed in Paul’s words. After all, ‘there’s no place like home’.[/vc_column_text][/vc_column][/vc_row][vc_row type=”in_container” full_screen_row_position=”middle” scene_position=”center” text_color=”dark” text_align=”left” overlay_strength=”0.3″][vc_column column_padding=”no-extra-padding” column_padding_position=”all” background_color_opacity=”1″ background_hover_color_opacity=”1″ width=”1/1″ tablet_text_alignment=”default” phone_text_alignment=”default”][recent_posts style=”default” category=”designers” columns=”3″ posts_per_page=”3″][/vc_column][/vc_row]