A LOOK BEHIND THE LENS: THE AGENT, THE MUSE AND THE STAR-ON-THE-RISE SHARE PER- SONAL INSIGHTS ON THE LIFE OF A MODEL AND HOW TO MAKE IT TO THE TOP.

THE MOMENT YOU FIND YOURSELF IN THE MIDST OF THROWING IT ALL AWAY IS OFTEN THE MOMENT DREAMS ARE MADE.

Unafraid to face what is just around the corner, it is these words from her father that have been particularly poignant to international model, Annalise McLachlan. While some may consider her career one of good fortune, Annalise is far from flippant when it comes to her success.

Entering the modelling industry at the age of 10, she has worked hard to establish her career and says her first big break didn’t really come until she was signed at the age of 16 with one of Australia’s leading agencies, Chic Management, which has also guided the careers of top models such as Miranda Kerr, Alyssa Sutherland, Abbey Lee Kershaw and Samantha Harris.

“When I first started working with Chic they helped me rebrand my personal image and things really took off for me,” Annalise says.

“I started working full-time as a model and had jobs booked for a year straight. It was everything I’d been dreaming and waiting for.”

Now at the age of 21, Annalise has worked editorially with some of the country’s most reputable fashion magazines, along with shooting campaigns for the likes of Sportsgirl, Jeans West and Cotton On. She is also muse for one of her favourite labels, Spell & the Gypsy, who designed a campaign based

“I’m a very confident woman, in a humble way, but I have my moments. It’s not easy, especially when I am without my friends and family and have too much time with my thoughts. I have my insecurities, as every woman does, and there is a lot of competition out there. It’s hard to not compare yourself with other girls, especially when they are landing jobs you really wanted.

I think you need a strong support system and a whole lot of patience,” Annalise says, acknowledging the love and encouragement her parents, Melissa and Guy McLachlan, and partner, Darcy Owens, have given her over the years.

From driving Annalise to Sydney for castings to chaperoning her on international shoots – including a three-month stint in Japan at the age of 14 – Annalise says her family’s support has been a huge part of her career.

“I don’t think I’d be where I am and have achieved what I have at such a young age without my family, especially my mum and dad,” she says. “Darcy has also been so supportive and helped me through some tough moments in the job. He just wants my dreams to come true and I’m lucky to have him.”

Kathy Ward, director of Chic Management, has been in the industry for more than 25 years and has launched the careers of some of the country’s most successful exports, many of whom have appeared in campaigns for some of the world’s leading fashion houses – Chanel, D&G, Gucci and Dior, to name a few. Kathy is also quick to point out that while the modelling industry looks glamourous from afar, it is not for the faint- hearted.

Of the hundreds of girls who enter the prestigious doors of Chic’s Sydney- based agency, only 3 to 5 percent would enjoy the international success seen by Annalise and on that hard-pathed journey to the top, Kathy likens it to that of the film industry.

“Actors have to go to many, many castings before they get their breakout role. It tests their ability to perform and builds their toughness and resilience. Models are also put through the rigour. While some may become an instant success, the majority of girls must learn to deal with rejection and be willing to work extremely hard,” she says.

“It takes time and patience to develop a skill in front of the camera and to learn to work with large creative teams. A young model must take a disciplinary approach and learn the skills first.”

For Kathy, a top model must have a look that is unique and makes her stand out in the crowd.“I think the top girls are a little bit different, they’re born to model and kind of fall into it,” Kathy says. “They often have other interests and aren’t pinning all their hopes on becoming a huge success, but they also work incredibly hard and have a very strong work ethic.”

Face of Façon winner, Chiara Voigt was a natural standout when she entered the Chic x Façon regional model competition in 2018. Tall and willowy with pixie-like features, she is a natural in front of the camera and despite confessing to being somewhat shy, she exudes confidence and stature on the runway. Although Chiara’s career is still in its infancy, she is excited about the future and what comes next.

“I’d never really considered modelling until I saw the Face of Façon competition and had never been on a (photo) shoot or done any runway work,” Chiara says. on her unique style of dressing and love of music festivals.

Annalise’s career has taken her to more than 13 countries, including Africa, the United States, United Kingdom, Japan and Sweden. On a glance, her Instagram account is full of breathtaking images shot in remote places across the globe and it is hard to not fall a little bit in love with the life of this wandering earth-child as she traverses the planet. From roughing it in campsites set against the burnt orange sands of the Sahara Desert, to shooting a Mad-Max style campaign in

El Paso Texas, life as a model affords Annalise with adventures one can only dream of.

“I’ve seen so many amazing places and met people from all walks of life. It is a very special part of my job and something I will never take for granted,” she says.

It is also a life that Annalise says can at times be lonely and full of self-doubt. It is during these times that she gathers strength from her father’s words and her own self-confessed headstrong, career-driven nature.

“I’m not sure exactly what type of model I want to be, but I do get a rush out of runway work, especially after opening the Spring Fashion Runway event for Façon last year.”

For those girls who do make it to the very top, it is a lucrative career, with Kathy saying models can earn anywhere between $5,000 to $80,000 per day depending on the campaign. The job also comes with additional perks such as invitations to sought-after parties, travel, endorsement deals and an in depth look into the fashion industry as a whole, which is something of particular interest to Annalise, who is looking at starting her own fashion label.

“I love being around creative, like-minded people and learning all aspects of the job and how a campaign all comes together,” Annalise says.

“If I think about life after modelling, Darcy and I have always had a dream to start our own clothing label. We both love to express ourselves through fashion and
I envisage starting a really unique, high-end brand that represents us both.”

Against a soft-lit, pastel sunrise as Annalise and Chiara shoot the cover story for Façon, The Newcastle Style Issue, it is clear their futures look bright. Although they appear fragile in contrast to the horses they lead along the coastline, it is obvious in speaking to them they possess an inner strength and quiet confidence that one senses will see them achieve their dreams.

This year Annalise is speaking to agencies in New York about representation and is hoping to be cast for the Victoria’s Secret runway and editorial campaign. It’s a life, like most, complete with highs and lows, and for girls looking to enter the industry, Annalise offers these words of advice: always be you and don’t let anyone tell you otherwise. Be confident. Be wise. Never do something that makes you feel uncomfortable. Be careful who you surround yourself

with and choose a good agent. Be patient and embrace every moment. All things change. Be kind. Be humble. Remember your time will come.

The 2019 Face of Façon model search is now open. Visit faconaustralia.com to enter. 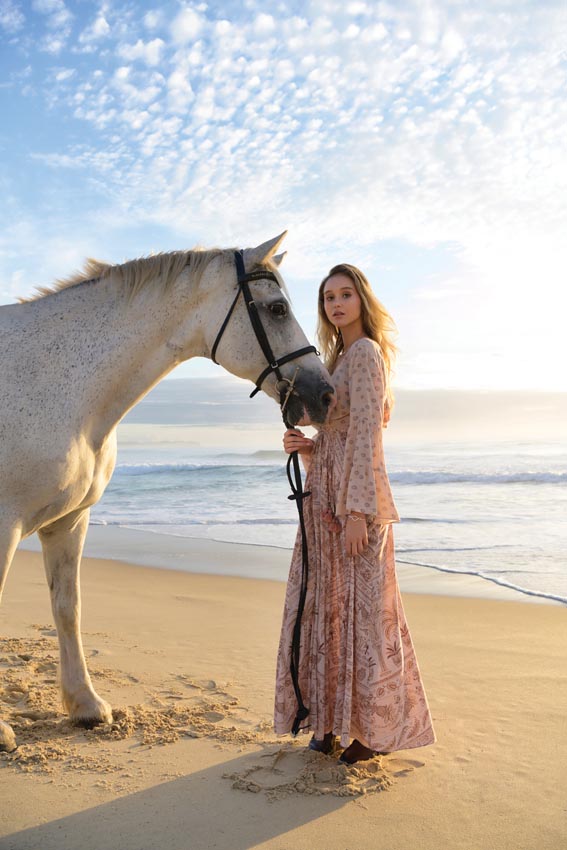 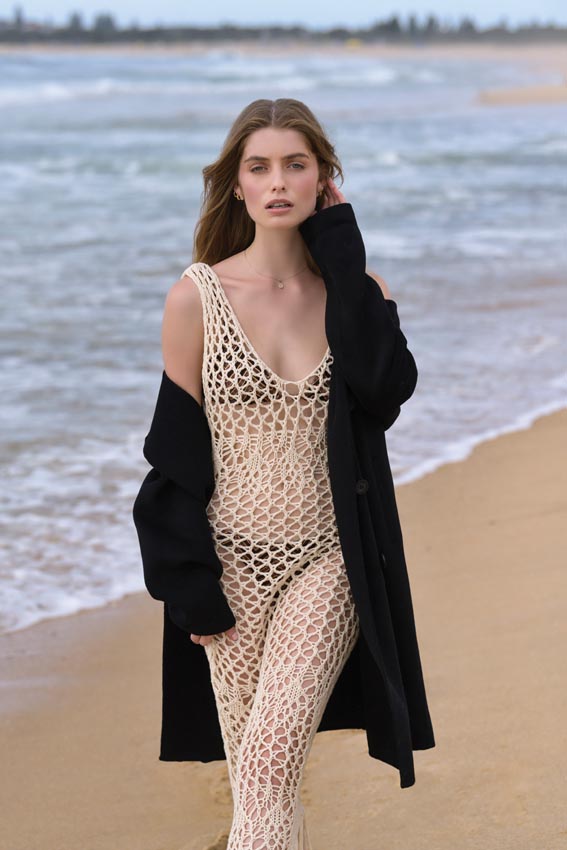 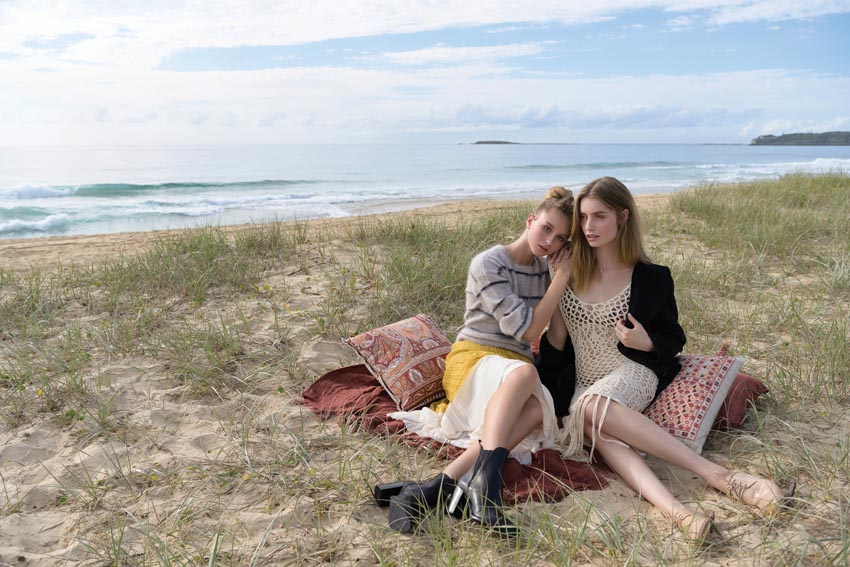 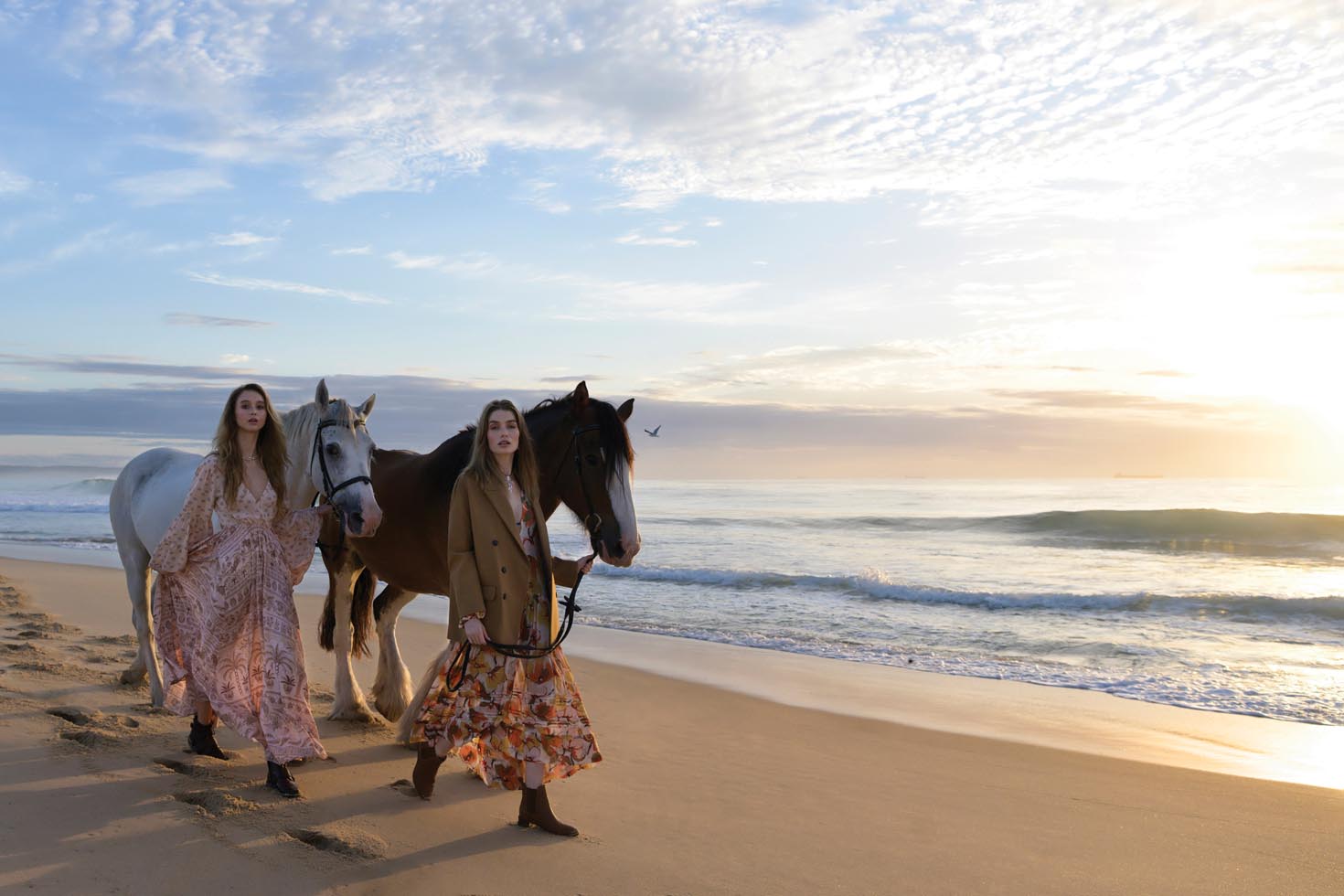 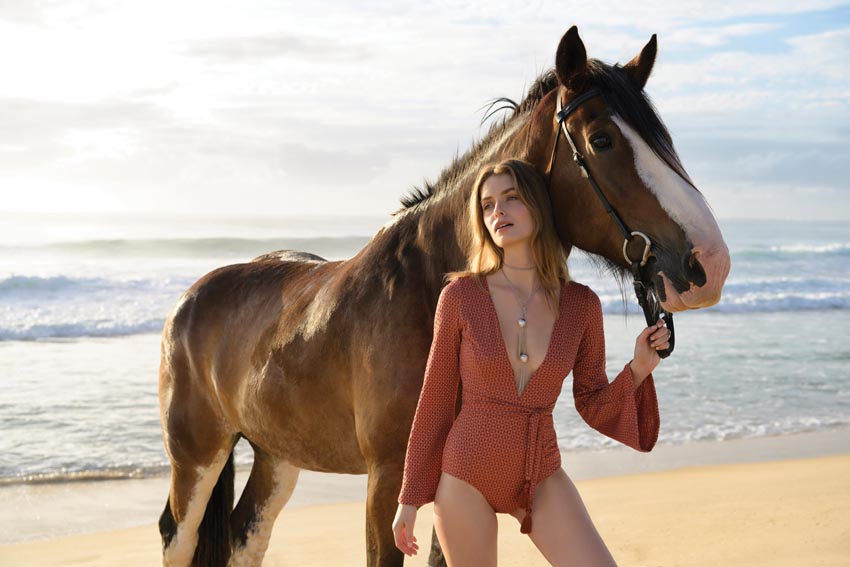 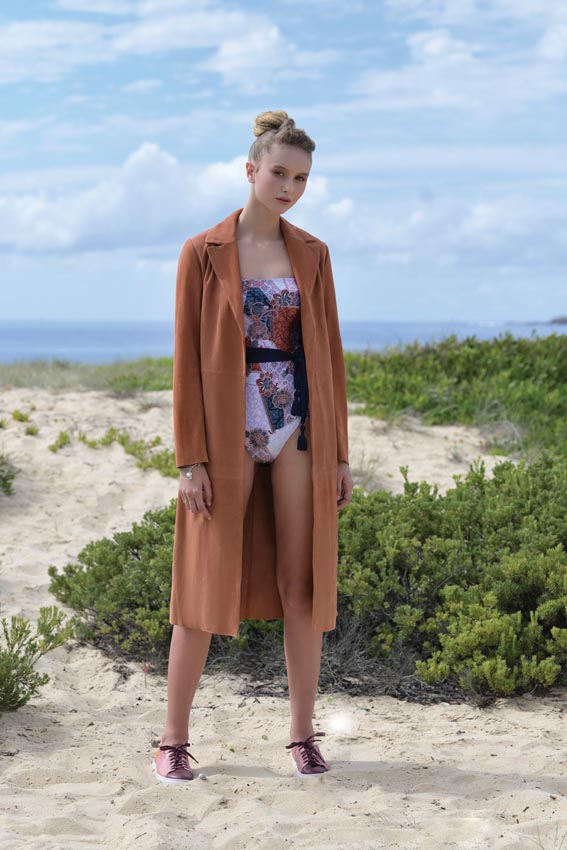 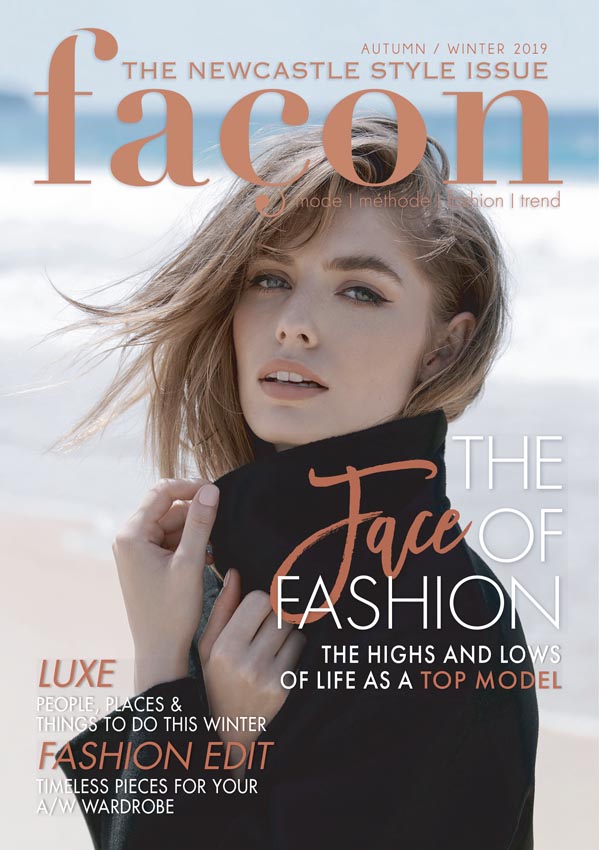 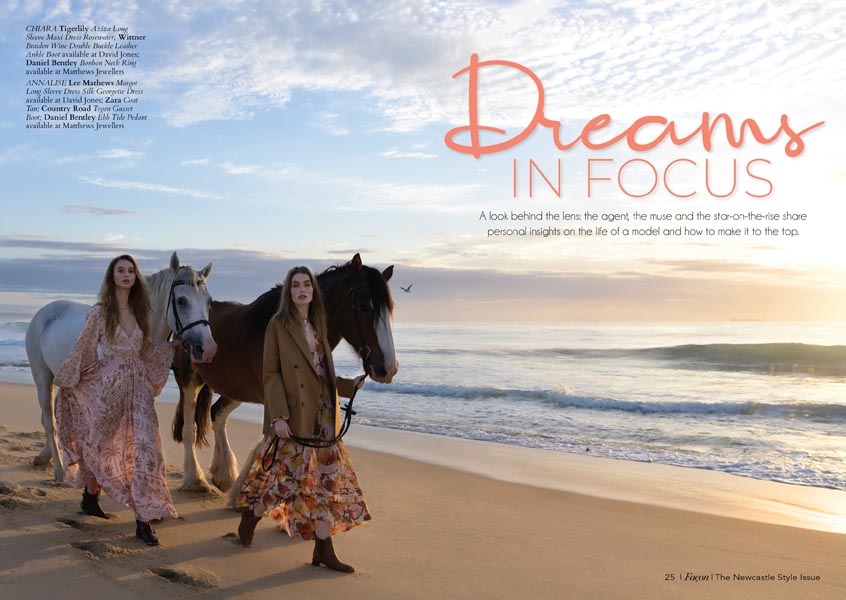 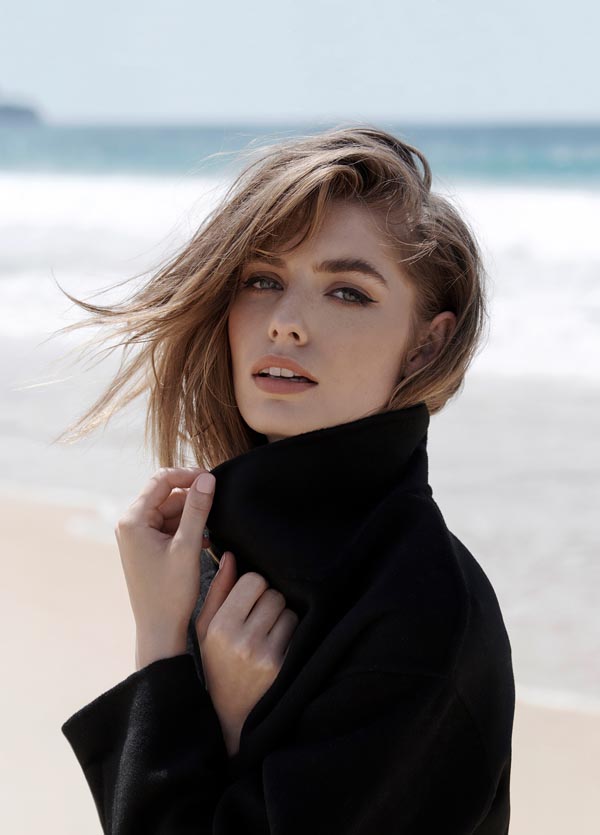 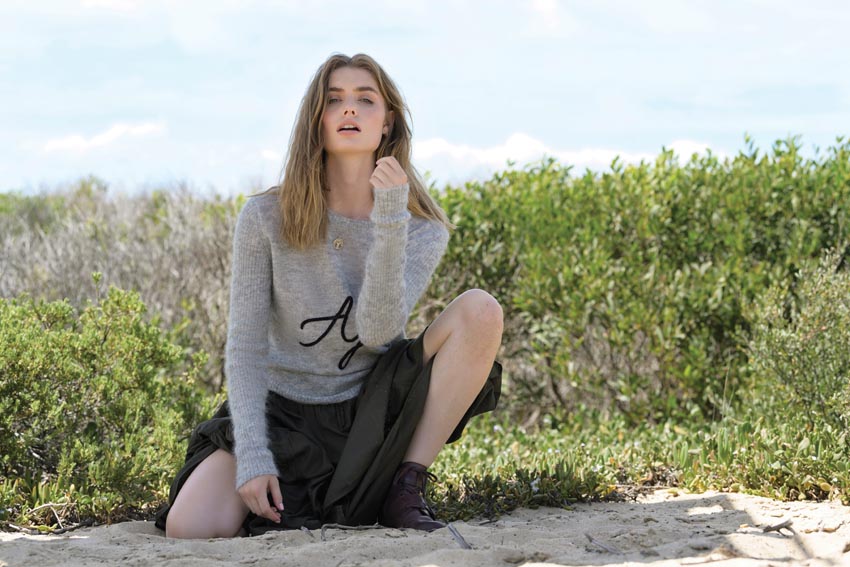 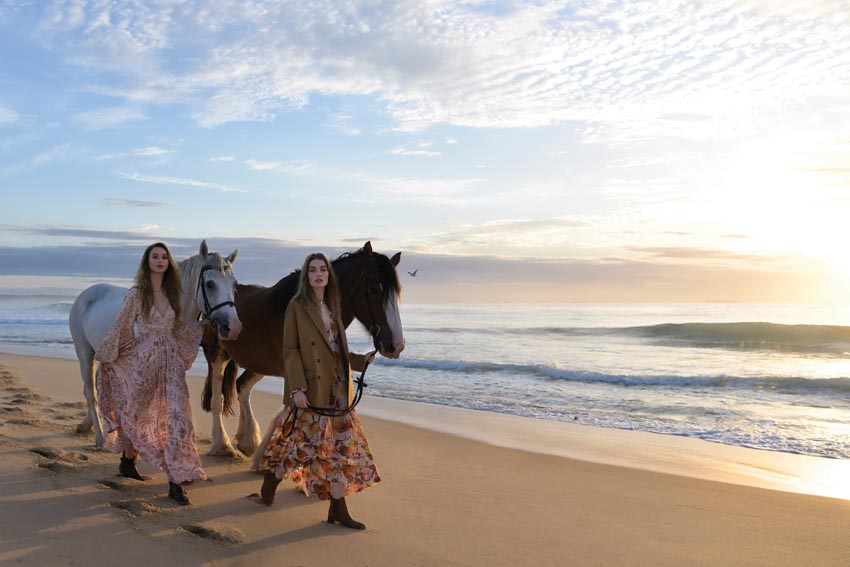